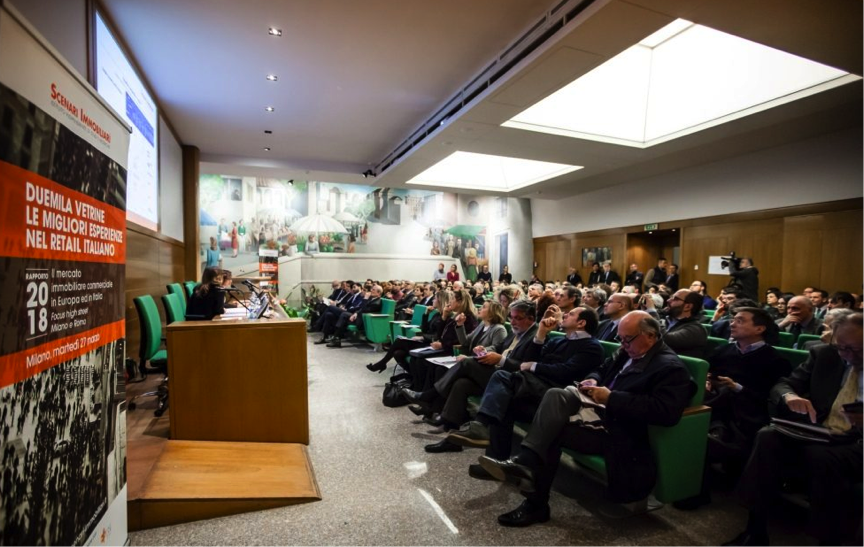 There was significant growth in 2017 in the commercial real estate sector, with turnover increasing by 4.2% over the previous year to 8.65 million euros. Stocks are on the rise after years of continuous decline. Even more substantial growth is expected in 2018, estimated at 5.2 percentage points. This emerged in a recent report “Two Thousand Windows: The best experiences in Italian retail”. The study covering commercial real estate in Europe and high street activity in Milan and Rome was undertaken by Scenari Immobiliari.

The upward trend began in 2016, after years of steady decline, continued in 2017. The average sales prices of the Italian commercial sector increased by 1.4%, with a greater increase for large-scale retail trade (GDO) (+1.7%) and smaller retail (1.1%). GDO recorded the highest gains in northern regions, with an annual increase of 2.3%. In central and southern regions the increases were lower, respectively 1.8% and 1%.

On the other hand, small distribution has had less dramatic increases in all regions. In particular, average sales prices rose by 1.6% in the north, while those in the center rose 1.3%. In the south sales remained substantially unchanged (+0.3%). The price trend was influenced by the demand for space by small distribution, and concentrated almost exclusively in central streets of cities, while it is scarce in semi-central and peripheral areas. Demand for GDO is more widespread, starting from suburbs and extending to urban centers, where in the last two years its presence has increased on average.

As far as Rome and Milan are concerned, according to the report, in the Capital the network of shops recorded an increase in stores in absolute terms compared to 2015, with 662 more activities (there were 36,492 in 2015). The most important roman high streets with brands of the highest segments are via dei Condotti, piazza di Spagna, via Frattina and via del Babuino. Together they concentrate around 273 commercial businesses, which correspond to 260 showcases (plus 87 entrances with shop windows), all in a little more than 1,300 meters of street space.

The lombard capital is ranked first among favorite destinations for shopping trips on a world scale. Shops in Milan recorded a slight contraction in the number of units in absolute terms, compared to 2015 (minus 153, 16,227 units in June 2015), largely due to the incorporation and/ or conversion of many locations into larger units (around one thousand square meters). However, the overall market remains concentrated in units below 150 square meters (86.4%). In the luxury high streets of Milan (via Monte Napoleone, via Sant’Andrea, via Verri, via della Spiga, and via Manzoni, the so-called “Fashion Quad”) turnover is limited and there is more flexibility in leasing fees, often with variable rents depending on turnover trends. The demand for commercial high street real estate by institutional investors is constantly increasing. The number of funds dedicated to this market is growing, characterized by a conservative approach that seeks specific products. More generally, according to a survey carried out in Milan shoppers travel over two kilometers (2,120 m) on luxury streets (between Monte Napoleone, Verri, Sant’Andrea, della Spiga and Manzoni) passing 508 windows (more than 130 entrances with showcases).